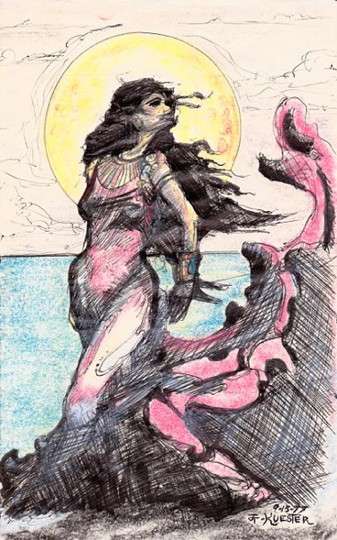 The sea's of Mars were nearly dry and though life had ceased to live in them long ago, Sandria was still in love with their pastel color at night. Clean, pleasant, salty sweetness filled the air of her seaside villa. With only two faint moons for company, she watched the reflections move under their influence. Theirs and the far off stars of the white galaxy.

"I would not die knowing you were not waiting for me, my husband," she said, speaking to his spirit in a voice of prayer. Her husband who had passed on over three years ago, killed near the great monolith, the volcano called High Dome, who's fires burned eternally, but murdered there in a moment of peace offering to the neighboring country, killed by a usurper. "But it is not my time, yet, is it, my love? I will live another thousand years before we stroll again under new lights of that far off pavilion of suns."

Sandria was only twenty-three actual years old, Martian years, much too young, many felt, for her to marry the once king of the land, but she knew her journey. She knew what she had to do.

"Yes. I will live until then unless I die tomorrow, husband of mine. My sweet Tharsmen."

The Martian war drums of her land were huge affairs that four men had to carry and two play. There were eighty of them on the field, now, their deep explosive booming in unison filled the sand blown valley from side to side with reverberations that shook the guts of brave men from one end of this place of death to its furthest wind swept corners, for there was no more waiting. The enemy was marching forward with their pathetic little drums no one could hear.

Queen, Sandria of Cartheasis, gave the signal of death with a nod of her incomparably beautiful head. Her wild ebony crown of hair swimming with the winds of Mars in glorious curling and twisting tresses that flowed wild and free but for the battle band of gold tied around her forehead, her countenance focused, her brow like flint, he blue eyes like the far away cold fire-filled stars of the black heavens of hell. She was imposing, there, standing tall with long sword and poniard at her belt. She was a leader, here and now. This is all that mattered.

A scream from coarse military throats cried out orders that echoed into the baking air of sunlight in ever widening circles. The Cartheasis command spat instructional authority to those that drew sword and lifted spear, loaded arrow, and hefted their heavy shields. Green pennants wavered over the hill tops of the crater, transferring the order to her two million men along its worn upheavals, to the front of each forward position, to prepare to march down through the red stone and sand from her command dais to the middle of the crater's depression and its central peak where they would meet with that hated race that had killed her husband and their king three long years before this day.

Sandria's mouth was dry with anticipation and her sword longed for the taste of blood upon its edge. When all was set, she and every general, every drummer, every pennant wielder, every water carrier and cook would move onto the field of battle.

Seen from the near side of the crater to its most northerly edge, the battalions there began their march into the lower sandy plains. The Detstros would not leave this valley alive, or she would not. There was no compromise in her black heart. There would be blood or victory. Nothing else mattered. 'Either to conquer or to die', that was the battle cry of the hour, and she had waited patiently and far too long for its arrival.

A legion of trumpets flared, now, in air like cries of the damned with their shrieks of spine trembling sounds and soul shrinking shrieks as the prepared of Cartheasis shouted with male tongues the battle cry, "Conquer or die," over and over, and over.

A scent of victory was in the air. Sandria could almost smell the banshees of death moving in around both armies, ready to claim the dying, envisioning their darkening shrouds converging on the enemy, the Detstros.

And then Cartheasis' approach slowed, half stepping, waiting till the Detstros entered further onto the crater floor, ever moving, unlike them against their enemy who had at last advanced themselves. Cartheasis was in full swing now, at last, at the precise moment of their planning.

She and her generals had anticipated concern on the side of the Detstros but it was too late for a change of strategy for them. Their lot was cast and theirs would soon solidify.

Three blast from the forward horns sent aft ranks to the sides at a sprint, the Detstros were soon contained on three sides and their ranks faltered and then reformed. Death was coming. Theirs was an army of three million against Cartheasis two. They thought to overwhelm. Cartheasis had planned.

Thinner ranks than theirs faced Detstross, now, perhaps, but men could only fight side by side so densely gathered. If there was more area covered, she and the generals reasoned, more enemy would fall quicker and being surrounded, it would be easier to hold them in place and whittle at them like fields of grain before the sickle.

With forces heavily outweighed in the enemies advantage, the generals of Cartheasis were eager to see their rear ranks break formation and head back up hill at a fevered pace. They dug in the sand where markers were placed, uncovering large bows hidden in the red soil attached to frames. They swung the war engines up on pivots, hastily cleaned the simple apparatus off with brushes and loaded the first salvos.

Without hesitation and by command, they fired the arrows as long as three men over the heads of their troops and into the orderly rows of the Detstros. The army scattered at each missile, it halving men in two with the exaggerated flutes of each point, killing at least fifteen to twenty warriors at a time. Ten releases later and the Detstros's orderly array was in ciaos and soon after, the Cartheasis fired balls of burning oil alternately, deeper into their enemy.

The two armies crashed into each other with sinew and arm swinging like rags in a strong wind, spilling the life of each other upon the sands of Mars, a billion miles from their worshiped peaceful gods and the loving mercy some men still believed in.

With deeper lines falling upon each other's necks, ripping at one another's golden throats, hacking at limbs, spearing bodies over the screams of earlier wounded men on both sides, dying by bloodied blue Martian blades, double edged axes, thrown shafts with serrated edges and cruel, piercing, hooked arrows, almost all was set in motion.

The clang and drum of tempered steel upon hardened bronze shields rang throughout and across the red crater like explosions from a blackened cloud choked sky, sweeping through the lungs and hearts of those who waited for their rotation at the gore drenched fighting line. Each face was twisted, each mouth set in grim determination, and too many in misshapen agony in their pain and dying.

Sandria spat order's over the tumult of noise; "Send the mounted troops on their way," she cried, ripping the gossamer cloth off her breast and tossing it to the hot wind. Stripped above the waist she drew her long sword with one wicked pull, not waiting to see if her orders were carried out, knowing they would be. "Forward to death," she cried at the top of her voice, it's high pitched scream drawing every eye of the Cartheasis leadership.

Holding sword overhead, whipping out the poniard with grim resolve Sandria began a long stridden march down into the valley of sorrow and the dying, the side of the steep crater swimming in battle dust that filled her nostrils with scent, the air smelling of the copper in men's blood.

Quickly, they charged, now, into the heart of the battle, set in their goal. Every stride of the men moved in sink with the queen, every mouth of leadership shouting, "To conquer or to die," they cried in unison, over and over, drawing weapons in both hands, setting their eye on a weakening enemy, setting ivory teeth into grins of death, looking forward to clashing with all the weight and power of their body's strength.

Back on the ridge, a Captain yelled quick orders before joining them, sweeping his long arm through the air, holding a white pennant. The mounted troops on the outside of the crater, unseen by the enemy, charged into motion around the perimeter of the battlefield; half one direction, half in the opposite. The fearsome Keatoom, the Martian reptilian horse and their riders, would surround and kill all but the last of the leadership of the Destros on the opposite side of the crater, cutting off their retreat from the rear. Their orders were to prevent their escape. The queen would deal with them. The plan was set in iron -- if they prevailed.

Sandria flew into the battle with her body guards and officers, swinging her long blade with both hands, thrust and stab, distract with the long blade, stab with the poniard, killing the enemy with untold furry and through the horror of battle's long practice bouts, perfected and honed. Her flesh became as blood, splattered and dripped with her enemies. She would not retreat. All here would die, even if she were one.

A large Detstros warrior fought his way valiantly through a series of Cartheasis, clearly heading for Sandria the queen.

"Hold!" she told her twice body guards whose job it was to protect her at all costs, but they were bound to obey her word.

Stepping over fallen bodies with full resolve, whispering beneath her breath she prayed to her husband; "Is this my way back to you, sweet Tharsmen?" as both enemies swung their long silver blades.

Sandria was intelligent enough to know she could not match the Detstros warrior's power, and though fast, he was not as fast as she.

She bent low over the ground as they both swung at waist level and only glanced his blade with hers, letting her long sword flip viciously through the sand and spin into it, there. But she was in close, now, and set her poniard in the giant man's inner thigh, cutting the major artery as he screamed his surprise and pain as Sandria pivoted, picking up an axe off the ground and stepping to the far side of the warrior from behind. The queen moved like wind, cutting half way through the man's large knee. Incapacitated, the two body guards moved in closer to the man, knowing Sandria had won. And with a thoughtless finality, she decapitated the beast with the heavy two handed axe and retrieved his head before it had a chance to die, it's eyes blinking in her face, dribbling gore, the mouth trembling and then was stilled.