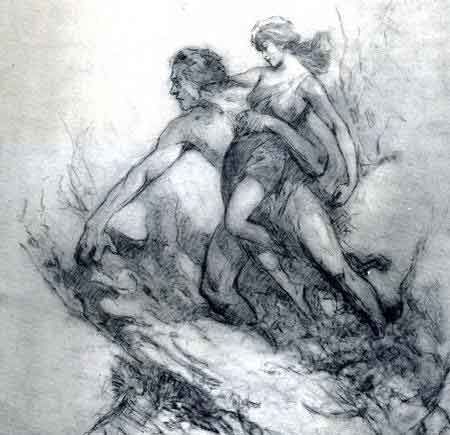 Trading was over. The cargo bay was full of gold and Dan wanted to get off of this planet with his seventeen tons of it and back into the trade routes.

"Am'atha I'm ready to leave, did you finish the preflight?" he asked, but there was no reply. Looking around, he discovered Am'atha was gone, though the near naked native he knew as Kara, stood nearby. She smiled and said something cute in her tongue but he didn't have his translator turned on.

Activating the program, "What was that, Kara?"

"You and Am'atha will eat now? I will make you good food. Fresh fish from the river, red fruits, and roasted nuts?"

"No, Kara. I was calling for Am'atha. It is time for us to leave. We are going back into the sky."

"Kara will go with you."

"No. I cannot take you. I'm sorry. You cannot go into the sky. You would not like it there."

"Your father and mother would not approve. Your brothers would not approve, either. I have seen how they look at you and me. And your leaders have told me not to defile their children. Taking you away without consent would make them angry. I will come back though."

"I am free person. They do not control my life." She seemed angry. "No one rules me." She was angry. Her golden skin turned pink with flushed emotion.

"If you live in this society, you must obey their laws. You would be punished if you disobey."

The last communiqué seemed to make her think.

She was humanoid and quite pretty, too, especially parading around in only her leather covered feet and that skimpy loin-cloth. But it was her sweet, gentle, and kind spirit in her nature that made her so loveable. Kara had grown rather attached to him since they'd arrived and she was always nearby. Some kind of crush, probably. But why had Am'atha gone back to the ship? Or was she in the village?

He called her on the multi-usage device on his forearm. There was no answer. He changed programs and accessed her signal. She was moving away from the ship and the big village, practically running into the depths of the forest. What the hell was she doing? This time, he brought up her camera. She was slung over the shoulder of some huge native and he was carrying her off, bouncing along on his shoulder like a sack of grain. Brother, were they ever strong, these locals. But sonofabitch! What did he think he was doing with her, but as the thought formed, he understood. He wanted a blond mate. Everyone here were brunettes.

He heard a weak reply of, "Hur-ry" and then Dan was running.

He jumped back into the ship, slapping the bay doors closed as he went past the switch and ran to the cockpit. He dove into the hydraulically controlled pilot's seat and immediately began dialing up the ship's engine. As it whined to life, the multiple screens around the control station saw people being attracted by the start up noise, the natives, but they were at a safe distance.

The pilot brought the space craft off the deck and rose over the trees, leaving the landing pads extended. The thick iron hull of its shape disappeared into the primitive blue sky in the direction of Am'atha and her captor. This wouldn't take long, he felt. A quick stun of the brute would take him to his knees and he'd be as docile as a drunk puppy.

He was looking below him on one of the screens of the console, that gave him thermal imaging of what was beneath the ship, when he heard a shuffling of moccasin covered feet behind him. When he looked, Kara was behind him, holding one of their lethal wooden knives, staring at him with wild eyes.

Dan Gardner stepped forward, out of the shadows of his freighter's bay doors, just opening. Steam hissed and dispersed into the air like burned off fog. He and Am'atha were surrounded by a thin yet protective, individual, force field as these beings were primitives, in some respects, and could not be trusted to not brain their skulls in with their golden clubs, half meter long knives, or brass axes. The field could stop an arrow, spear, and even an old fashioned bullet but it was awkward to have the thing turned on until they felt safe. It extended only three centimeters over a living beings tissues, but it was enough to create difficulties. He knew nothing about these natives and knew they must be cautious. After seeing his trade goods, he didn't know how they'd react. But having scanned the area from overhead, those ground readings showed there were was a lot of good minerals beneath this black soil. Huge amounts, really. He hoped the concept of trade and barter were known to them.

Gold was a commodity even more sought after than fifty years ago, before interstellar flight became common to earth. With the invention of the Gravity Drive by some teenager who dropped it onto the world wide web for everyone to have, back then, gold was more precious than ever, for it was one of the essence of the drive's function. Though not used as fuel, it was still a critical mineral in the make-up and currently, was more than sought after by almost every developed country on earth that was producing engines and space craft, needing it for their exploration and trade ships that had fanned out into the galaxies nearby stars. And now that privateers, like himself, were becoming all too common, it was needed more than the pharaohs of old required of ancient Nubia. It was super high priced stuff, now a days, much-much more than before.

Finding it and mining it was usually not the problem. Getting it from the locals was, if there were any about. It was much easier to trade for the "yellow rock" than harvest it by bringing in a bunch of heavy equipment.

Dan stepped to the ground slowly, carrying a voluminous trunk filled with goods he hoped they would want and need. He smiled and used the translator feature on his left forearm to speak to them. Like most less sophisticated cultures man had come upon out here, they were impressed with this man from the sky and his golden haired woman who when Am'atha appeared, at first, behind him, they all but bowed down to the ground in her presence, she was so highly thought of as a deity figure, initially, there.